Why with the success abroad, Belarus’ agriculture keeps failing at home?

On 7 August 2016 the Minister of Agriculture and Food of Belarus Leanid Zayats announced that the country received $11m per day between January and June 2016 for exporting its agricultural products; this accounted for 18 per cent of all Belarusian exports.

At home, however, people are blaming authorities for high food prices. Experts point to high expenditures on agriculture, which exceeds income from export. Another problem is strong dependence on the Russian market – 85-98 per cent of Belarusian agricultural exports go to Russia.

An engine for economic development?

Agriculture has remained a priority for Aliaksandr Lukashenka throughout his presidency. Content analysis of his speeches reveals that the president time and again declares agriculture to be the driving force for economic development in Belarus.

Officials emphasise the growth of export as the main reason for the success of the Belarusian agricultural sector. Due to sanctions imposed by Russia against Western food products, Belarus has managed to increase its share of the Russian market. The table below illustrates this: 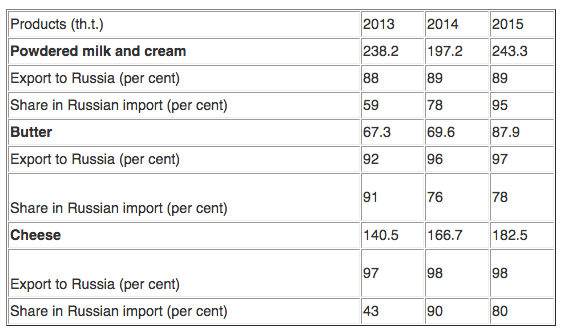 In August 2015 the Russian Minister of Agriculture Alexander Tkachiov claimed that Belarus, with a total market share of 86 per cent, had almost completely replaced the EU in import of dairy products to Russia.

However, more detailed statistical data cast a shadow on the economic success of Belarusian agriculture. The table below depicts Belarusian export of the four most important agricultural products in 2013-2015. All calculations have been made by the author based on data from the National Statistical Committee of Belarus and National Bank of Belarus. 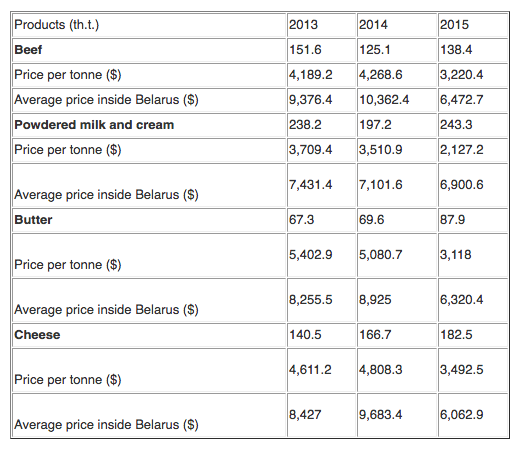 Firstly, they demonstrate its strong dependence on the Russian market. Russian authorities constantly accuse Belarus of dumping as well as exporting low-quality and / or re-exported agricultural products. Moreover, the deteriorating economic situation in Russia directly influences prices for Belarusian agricultural products. In 2015 they fell significantly compared to 2014.

Preserving Belarus's status on the Russian agricultural market requires significant financial government allocations to agriculture. Even the authorities admit that they allocated more than $40bn for modernization of the agricultural sector.

At the same time, the sector continues to offer some of the lowest salaries in the country - 66-72.25 per cent of the national average. About 35 per cent state agricultural enterprises remain unprofitable, while the total profitability amounts to 0.5-0.6 per cent. Unfortunately, such poor economic conditions are what allow Belarus to maintain its share on the Russian agricultural market.

What's more, the Russian agency 'Rosselhoznadzor' and the Russian Prime-Minister Dmitry Medvedev have have accused Belarus of re-exporting EU agricultural products, prohibited in Russia. Some experts claim that around $2bn out of a total of $4-5bn gained from Belarusian agricultural export comes from re-exporting.

Secondly, these figures confirm the existence of dumping. Prices inside Belarus can be twice as high as prices in Russia. This context makes exports to Russia seem much less profitable.

The government tries to concentrate agricultural production in large state-owned farms. About 1,400 milk-producing farms produce 61.5 per cent of all dairy products. Nevertheless, authorities believe that state farms should be producing an even higher proportion of Belarusian dairy and blame private farms for the competition.

The special government programme ‘Development of private farms in 2011-2015’ appeared to eliminate this competition while providing sources of cheap crude products either for further processing or direct export to Russia.

However, the name of the programme should not deceive readers. It stipulates a decrease of food production by private farms and a state monopoly on buying such products. It also requires maintaining ridiculously low farm-gate prices.

A story reported by numerous Belarusian mass-media, which occurred in May-June 2016, illustrates how this system works. Seven people from a village in the Haradok district of Vitsiebsk region near the Russian border sold their cattle to a Russian businessman instead of selling to the closest state agricultural enterprise. The latter would have offered much less and involved significant delays.

As a result, the local authorities initiated an investigation and tried to bring these people to court, as well trying to confiscate money already paid.

However, this success comes at a high cost inside the country. Authorities allocate many resources to supporting this level of export. Extremely high domestic prices compensate for dumping in Russia.

Stanislau Bagdankevich: The living standard will continue to fall in 2017, and possibly in 2018

Stanislau Bagdankevich: Next year will be harsh

Leu Margolin: It is impossible to bring back the 500 dollars salary

Leu Marholin: In 2017, the probability of economic growth is close to zero

Leu Marholin: We are heading full speed to the new nineties

Leanid Zaika: Decline in prices on gas should lead to the reduction in utility costs

Point of view: Defence industry in Belarus evolved from helpless to a weighty branch of economy

Leu Marholin: It looks like the Belarusian PM has got a fortuneteller

Why with the success abroad, Belarus’ agriculture keeps failing at home?

Viktar Marhelau: We killed consumer demand inside the country

Opinion: The question of what role China can play in Belarusian development remains open

Leanid Zlotnikau: The government knows what to do with the economy, but will do nothing

Gintautas Mažeikis: The relation of political field and arena in the framework of information war

“It is our big joint work”

About us in media

Shhh! Belarus Wants You to Think It’s Turning Over a New Leaf

Mikhail Matskevich: How to create a local agenda and make it a problem solving tool